We are pleased with the results achieved in the three quarters

Despite difficult market conditions, we recorded an increase in the Group’s gross profit within continuing operations (i.e. construction and service operations) from PLN 230 million in three quarters of 2020 to PLN 389 million in three quarters of 2021 with a simultaneous increase in profitability from 4.1% to 7.0%. Such a good result is the effect of the improvement in the result of the construction and service areas as well as the settlement of the result from transactions between the construction and development segments in the amount of PLN 68 million resulting from the sale of Budimex Nieruchomości. 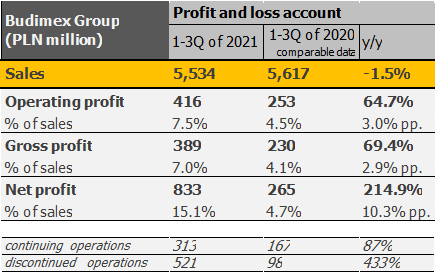 We recorded a slight decrease in the Group’s sales revenue - although revenue in the service segment increased by 30.8% - and in the construction segment which decreased by 7.1%. Several material orders from the road construction area are now at the design phase or we are waiting for the issuance of permission for the implementation of a road investment, which means that production within these contracts is relatively low.

The construction and assembly production for three quarters of 2021
(in current prices) increased year-on-year by 4.9% from the level of PLN 73.7 billion in 2020 to PLN 77.4 billion in 2021. In the segment of buildings, sold production increased by 3.4% while in the infrastructural area, the growth amounted to 6.4%. 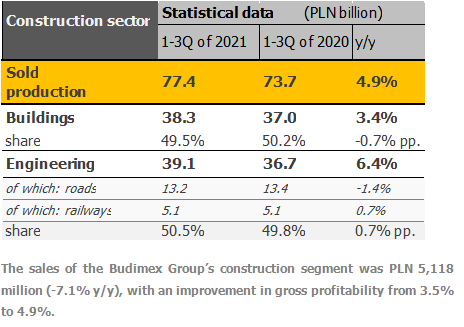 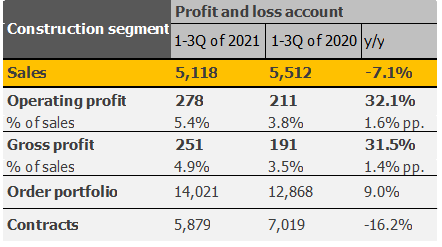 The scale of sales revenue for nine months of 2021 is lower by 7.1% than in the corresponding period of the previous year. At this point, it is worth noting that the dynamics of decrease in the 3rd quarter was only -1.9% compared to the 3rd quarter of the previous year. The dynamics of change is below the market indicator, which currently amounts to 4.9%.

The gross profitability of the construction segment amounted to 4.9% and was higher compared to the corresponding period of the previous year when it was 3.5%.

Similarly as in the 2 previous quarters, we are experiencing a significant increase in the prices of materials; however, due to partial indexation mechanisms and our policy of securing prices of key ranges, we are able to maintain the originally planned contract margin in the case of most projects.

From January to September 2021, we obtained contracts of PLN 5,879 million, while we have upcoming orders of the value exceeding PLN 1 billion waiting for signing, the largest project of which is the Bydgoszcz-Toruń section of S10 motorway with a value of PLN 333 million. It is a lower level than one year ago, but our priority is, invariably, to take care of the profitability of the order portfolio. At the end of September 2021, the value of the order portfolio reached PLN 14,021 million.

In the period from January to September 2021, the FBSerwis Group significantly increased sales revenue and gross profit.

The dynamics of sales revenue of the service segment amounted to 30.8%. Revenue of the FBSerwis Group, which is the key asset within the segment, was PLN 561 million and grew by 30.6% compared to the previous year, which resulted from increased volumes in the waste management segment. The gross profit amounted to PLN 75 million compared to PLN 52 million in the corresponding period of the previous year.

In September 2021, companies from the FBSerwis Group won another tender for the management of waste from Warsaw. We continuously increase the economic potential of the FBSerwis Group, e.g. through investments in the extension of the existing facilities for waste treatment and landfills. Independently, we are also carrying out acquisition projects, which will allow increasing the scale of the Group’s activities. Currently, we are looking for companies which will help us to realise and simultaneously increase sales in order to achieve in 2025 one billion while maintaining, at the same time, the margin level.

We are ending the third quarter of 2021 with the order portfolio at a record level of PLN 14 billion. While analysing the current portfolio and our schedule of works, we have a chance to end the year with better dynamics of sales revenues compared to the result from the three quarters.

After taking into account contracts which we are planning to sign during the next few months, our scope of works is secured to a large extent until the end of 2023, due to which we take a selective approach to new offers, calculating cost estimates thoroughly and responsibly, in particular in an environment of dynamically changing prices.

We are carefully monitoring the development of the situation in the area of EU funds, which are crucial for construction investments. We believe that discussions on the allocation of the Recovery Funds will be concluded successfully, and we can continue to participate in the performance of construction projects in Poland co-financed from the EU funds.

Recent quarters have brought significant increases in prices of materials, with which the construction market has to cope. That is why we focus on the control of costs, which allows us to minimise the impact of negative market factors and, as a consequence, will enable the achievement of profitability above market indicators. We assess positively the impact of the valorisation clauses, which at least partially compensate for the increase in prices of materials. This may protect many smaller companies against bankruptcy.

In the third quarter we achieved the internally adopted objectives in the scope of foreign expansion to neighbouring markets, i.e. the German, Slovak and Czech markets. We established special purpose vehicles on the German, Slovak and Czech markets. On the German market we are at the top position in one of tendering procedures, waiting for the selection of our bid. We expect that we will sign the first contracts in 2022.

We are analysing possibilities to enter into new projects, including projects of photovoltaic and wind farms, where we have already obtained experience as a general contractor. Currently, we are conducting negotiations with several companies with which we would like to establish cooperation, entering into ready projects, but also buying projects at certain stages, which will allow us to build our presence on the green energy market as an investor.

The Budimex Group also invests in innovative technologies, including green technologies, i.e. reduction of carbon footprints, effective management of waste, storage of short-term and long-term energy, production of electricity and heat originating from renewable energy sources. We also check the possibilities of using artificial intelligence in the scope of image recognition and analysis to completely eliminate near-miss incidents during construction works and machinery operation. In October, we start the Budimex Startup Challenge programme. We are looking for young companies which follow values similar to ours and want to modernise the construction sector.

Despite the difficult environment, we fulfil contractual obligations and implement tasks entrusted to us in accordance with the provisions, at the same time taking care of quality and maintenance of top environmental and social standards. Recently, our efforts have been recognised with the award in the Sustainable Economy Diamonds competition in the category of Sustainable Construction Leader. We have also received five awards in the Building of the Year 2020 competition, winning the largest number of awards from all general contractors.

BUDIMEX SA is a company with over fifty years of tradition, which has a significant contribution to the economic development of Poland. With our work, we improve the quality of life of millions of Poles. During the 50 years of our existence, we have completed thousands of modern infrastructure, construction and industrial investments. The culture of innovation, improvement and following the principles of sustainable development allowed us to gain the position of a leader in the Polish construction market. Not only are we present on the Polish market, but also abroad. We gradually increase our involvement in the facility management (operation of real estate and infrastructure facilities) and waste management sectors. Since 1995, our company has been listed on the Warsaw Stock Exchange, and since 2011 it has been included in the ESG index – gathering the most responsible companies on the stock exchange. Its strategic investor is a Spanish company with global reach – Ferrovial. The group includes: Mostostal Kraków and FB Serwis.

We are one of the signatories of the Agreement for Safety in Construction – an initiative established in 2010, bringing together the largest general contractors in Poland in order to improve occupational safety in the construction industry.

More information is available at www.budimex.pl/en

The website leaves information on users' end devices (cookies) and uses this information to facilitate the use of the website. If you have allowed cookies to be stored in your browser settings, they will be left on your end device. You can define the conditions for storing or accessing cookies in your browser.